The main folk is the "pandav dance uttarakhand"… special relation to the land of Garhwal.

The main folk  is the "pandav dance uttarakhand"… special relation to the land of Garhwal.  The origin of Pandava Leela corresponds to Hindu mythology and hence its establishment cannot be dated. This is not always done by village enthusiasts, and professionals, and is usually sponsored by the Rajput of Uttarakhand. A performance is often called Aaradhya, a Hindu ritual of ancestor worship, and Lila is seen as ancestor worship; Today, many Garhwalis are identified as descendants of the Pandavas. These performances usually take place between November and February and a particular village cannot host it every year. People can visit a nearby village to see Leela. Sachs writes that "Most of the villagers in Garhwal walk away from the Leela of the Pandavas in any given year. Although Uttarakhand is a repository of many folk dances, the Pandava dance is a major traditional folk dance of the Devbhoomi Uttarakhand. This dance is performed by five Pandavas in the Mahabharata. It is related to the life of the Pandavas. Every person knows about the Pandava dance, who has spent his life among the beautiful litigants of Uttarakhand, many rituals, beautiful traditions. Let us tell you that the Pandava folk dance is a special dance in the Garhwal region. It is from here that the Pandavas went to Swargahorni. That is why there is a special tradition of Pandava worship in Uttarakhand. It is said that while going to heaven, the Pandavas went through the Alaknanda and Mandakini rivers to Swargahroni. Wherever the Pandavas passed, those places But especially the Pandav Leela is held. Every year from November to February, Pandava dance is organized in Kedarghati. This is why Uttarakhand is also called Pandava ki Dhara. People dance to the beat and tune of musical instruments. Are mainly located in Pandavas left weapons at the place where Pandavas dances are held. In Uttarakhand, the Pandava dance is held for a full month. In the Garhwal region, the farming work is completed during November and December and the villagers actively participate in organizing Pandava dance during this free time. The most exciting Pandava dance takes place in the villages adjacent to the Kedarnath-Badrinath Dham in the Rudraprayag-Chamoli districts. 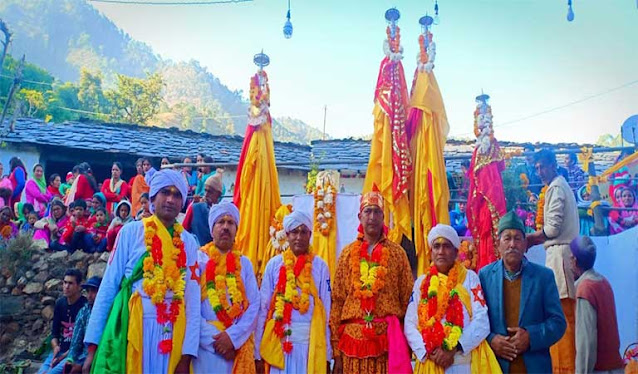 Relation of Pandava dance to the land of Garhwal-

There are popular beliefs about Pandava dance that after the end of the war of Mahabharata, Ved Vyas Muni told the Pandavas that they have committed many sins in this war. Such as total murder, Gautra murder, Brahman murder because Pandava and Kauravas belonged to the same clan. And to get rid of these sins, sent the Pandavas to the shelter of Lord Shiva. And said that only Lord Shiva will be able to free you from sins. In search of Lord Shiva, the five Pandavas walk towards Mount Kailash. Lord Shiva did not want to free the Pandavas from the sins committed by them. Therefore Lord Shiva goes to Kedarnath to escape from the Pandavas. Pandavas come to Kedarnath in search of Lord Shiva. And Shiva takes the form of Mahish to avoid Pandava in Lord Kedarnath. But Bhima Shiva recognizes God as Mahish and as he approaches Mahish, Lord Shiva finds himself on the earth as Mahish. Legendary belief is that Kedanath was incorporated into the earth and Lord Shiva's head appeared in Pashupatinath Nepal. While other parts of the body like - Nabhi appeared in Madmaheshwar, arms in Tungnath, back parts in Kedarnath, Jata Kalpnath and mouth Rudranath These five pilgrimages in Uttarakhand -Kedarnath, Kalpnath,Rudranath, Tungnath and Madmaheshwar are known as Pacha Kedar.

Dhol - embodies on the special beat of Damaun.

Archana built the historic Kedarnath temple. And in this way, by offering pooja and worshiping other parts of Lord Shiva, built temples. After this, the Pandavas and Draupadi set out for heaven to attain salvation. Swargahroni is ahead of Badrinath Dham. Draupadi gives up her life at a place called Bhima Pul while going to Swargahroni. Nakula gave up his life at a place called Lakshmipati and Sahadeva at a place called Sahastradhara. After this, Arjuna gave up his life in Chakratirtha and Bhima in Santopanth. Only Yudhishthra reaches the heavenly place. With Yudhishthra it is said that there is also a farce. From heaven comes a messenger in the Pushpak plane. And Yudhishthira goes to heaven. After the war of Mahabharata, the Pandavas handed over their destructive weapons and weapons to the people of Uttarakhand and after that they left for the self-immolation, so their weapons are still worshiped in many villages and Pandavas. Leela is organized. A special Pandava is incarnated on a particular Thapa, that is, Yudhishthira is a special beat of Pashwa's incarnation, similarly Bhima, Arjuna, Nakula, Sahadeva, etc. characters have their own special patha. Pandava Pashwa often falls on the same people, in whose family they have been advancing in the past. The players also sing the essential episodes of Mahabharata on various rhythms of Dhol-Damau.

Popular posts from this blog

January 22, 2021
Uttarakhand culture, Religion ,Art & Craft, Literacy, Old & New Generation Dress/Costumes.. Uttarakhand, formerly Uttaranchal, the state of India, is located in the northwestern part of the country. It is located to the northwest of the state of Himachal Pradesh in India , to the northeast from the Tibet Autonomous Region of China, to the south-east by Nepal, and to the south and southwest by the Indian state of Uttar Pradesh. Its capital is the northwestern city of Dehradun.   On 9 November 2000, the state of Uttaranchal - the 27th state of India - was carved out of Uttar Pradesh, and in January 2007 the new state changed its name to Uttarakhand, meaning " Northern Territory ", which was the traditional name. Area. Area 19,739 sq mi (51,125 sq km). Pop. (2011) 10,116,752.   Uttarakhand has a highly diverse topography with snow-clad peaks, glaciers, deep valleys, roaring streams, beautiful lakes and a few patches of dusty plains to the south. Some of the highest mou
Post a Comment
Read more

January 21, 2021
Hello friends my name is Mahesh Singh. I am a resident of Uttarakhand. I used to work in SEO in a small company. And due to the lockdown in March 2020, it had a profound impact on the entire economy and at the same time due to prolonged unemployment in our lives, it started functioning from 2021 this year. Through my Hindi and English blog, I want to tell about the top famous places of Uttarakhand and culture, religion, arts and crafts, literacy, dress and costumes of old and new generation. People of Uttarakhand For their simple lifestyle, honesty and humility, the people of Uttarakhand reflect an honest bond with nature and the gods. While there is a fair amount of cities in the state, which are covered with all the state-of-the-art facilities and crowds from other parts of the country, however, it cannot distance the people of Uttarakhand from their culture and traditional values. The culture of Uttarakhand still revolves around its traditional morals, moral values, simplicity of na
Post a Comment
Read more